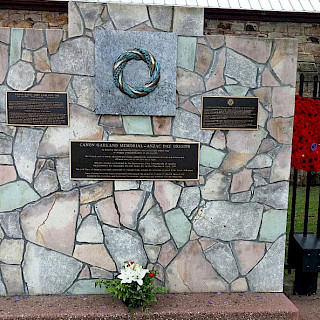 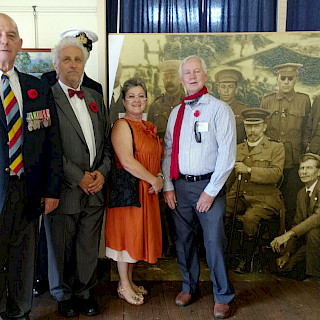 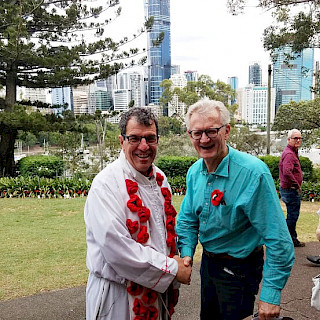 From the pages of forgotten history.

Today most of the Western world commemorated the centenary of Armistice Day or Remembrance Day. Australia, who lost over 64,000 men in that conflict, is no exception. Ceremonies were conducted all over the country, including at the St. Mary’s Anglican Church, Brisbane’s Royal Navy’s church. The Naval Memorial in the church yard and the Canon Garland Memorial next to the church were covered with poppies, designated as the flower of remembrance of World War 1 by the Allies.

Following the church service people gathered in small groups waiting for the ritual of a Minute’s Silence and to say a prayer or just remember the ultimate sacrifice committed by the young men in a «War to end all wars». An active part in the commemoration was taken by members of the Canon Garland Memorial Society, particularly Peter Collins, Secretary and the on-line curator of the Society’s web site, who had, amongst other things, set up a display stand in the Church Hall featuring photographs dealing with the community’s contribution to the War effort and more current ones connected to the activities of the Garland Society. Amongst the latter were photos of Fr. Gabriel of the St. Nicholas Cathedral, Victor Ovchinnikov from the Russian Australian Representative Council and Constantine Drozdovskii of «From Russia with Love».
Not many people in Australia (and most likely, elsewhere) are aware that Russia’s participation in World War 1 had cost it over 1,600,000 soldiers and officers. And yet, in this small ceremony in the St. Mary’s Anglican Church Hall in Australia that they were also remembered.

Of course anyone with just a smattering of history knows that the newly emerged Soviet Union had sued for separate peace with Germany, but very few would have heard of the Russian Legion of Honour (Legion Russe pour I ’ Honneur) that continued to fight under the French command right to the last day of the War. As an interesting post-script of history, one of the members of the Russian Legion, a machine gunner, was later to reach the title of Marshall of the Soviet Union, and later still USSR’s Minister for Defence — Rodion Yakovlevich Malinovsky. Russians from Harbin would also know that it was he who took the last parade of the members of the White Army (in uniform and wearing their Imperial medals), who joined in the Victory Parade of the Red Army in Harbin.

But back to 2018 and the Remembrance Day in Brisbane, Australia. People stood around the memorial to the Origins of Anzac Day — Canon David John Garland. Many of them discovering for themselves that ANZAC Day had its origins in Brisbane and that its architect was the Anglican priest, the same priest who had during difficult times for Russian refugees stretched out his hand to both the Russian Orthodox and the Greek Orthodox communities, helping them to establish their own parishes and to build their cathedrals and churches.

The Day is for Remembrance, for remembering and honouring the young men and women who had given their all, but in this case we remembered not only the sacrifice of the fallen, but also the best of the human spirit in general.